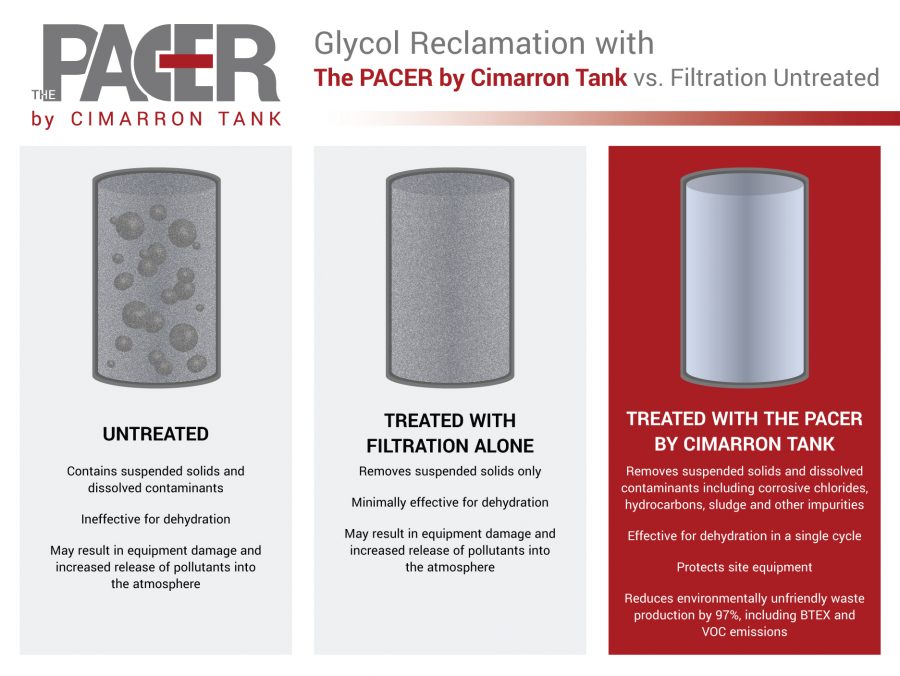 Dehydrating raw natural gas often calls for the use of triethylene glycol (TEG). This dehydration input acts like a sponge, not only removing water vapor from the gas stream but also collecting other unwanted particulates throughout the process. Maintaining a supply of clean TEG requires a filtration step to ensure the dehydration process, and the flow of gas, remains as efficient as possible.

Spent TEG contains water as well as suspended solids and dissolved contaminants, such as sludge and chlorides. These materials render used TEG ineffective for dehydration as the glycol is too saturated to continue pulling water and other compounds from the gas. Untreated TEG can also result in equipment damage and increase the release of volatile organic compounds (VOCs) that pollute the atmosphere. The bottom line – when left untreated, unfiltered TEG is an expensive problem for pipeline operators.

Filtering the TEG is an option to head off some of the negative outcomes previously described. Filtration removes suspended particulates from the TEG, and the filtered fluid regains a fraction of its effectiveness for the dehydration process. However, there is still a chance for equipment damage and the release of pollutants into the air.

The best solution for maximizing the efficiency and life of your triethylene glycol is reclamation with the PACER by Cimarron Tank. The PACER’s technology removes suspended solids and dissolved contaminants including corrosive chlorides, hydrocarbons, sludge and other impurities, returning rejuvenated TEG back to the dehydrating process for reuse. When used as a sidestream connected to a dehydrator, the PACER cleans not only the spent TEG but also the dehydrator unit itself, providing a layer of preventative maintenance and extending the life of the equipment. The PACER can also purify spent TEG stores in a batch process when connected to a holding tank. In addition to its operational versatility, the PACER reduces environmentally unfriendly waste production, including BTEX and VOC emissions, by up to 97 percent.

Minimizing costs and maximizing efficiency is essential to midstream natural gas operations. Get in touch to learn how the PACER by Cimarron Tank can help solve your glycol challenge to keep your site on line and in production.